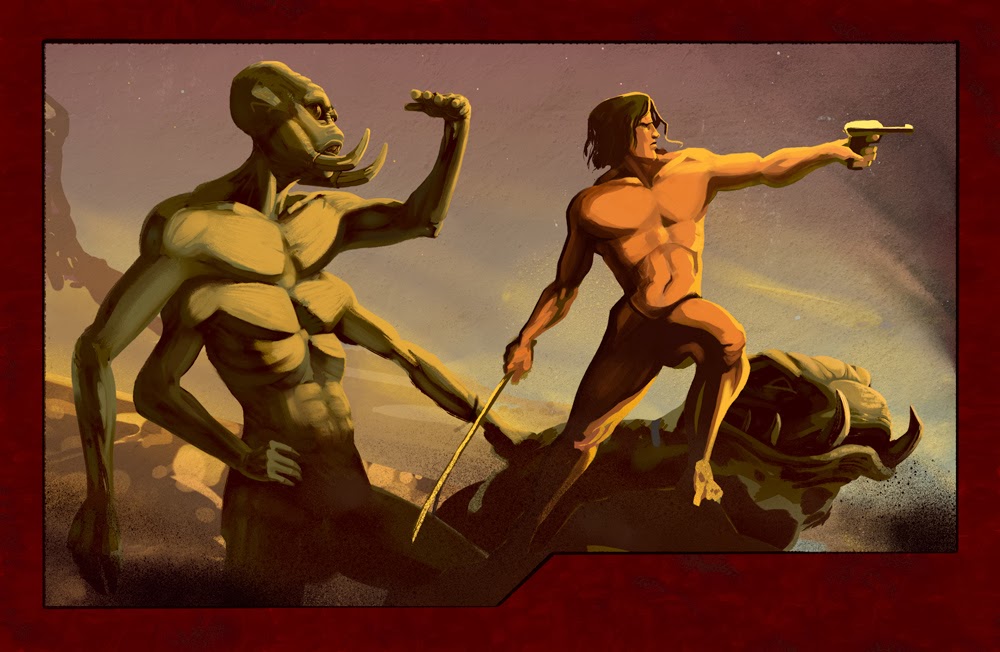 As I was working I caught that his right arm was matching that of the Thark's again, so I pulled it up into a straight-ahead, "about to fire" pose, which actually is for the best because now the angle of his leg directs the eye toward it.  I'll need to watch my saturation as I start refining details.
Posted by ArtByBeaver at 6:41 PM No comments:

We'll see where this goes. 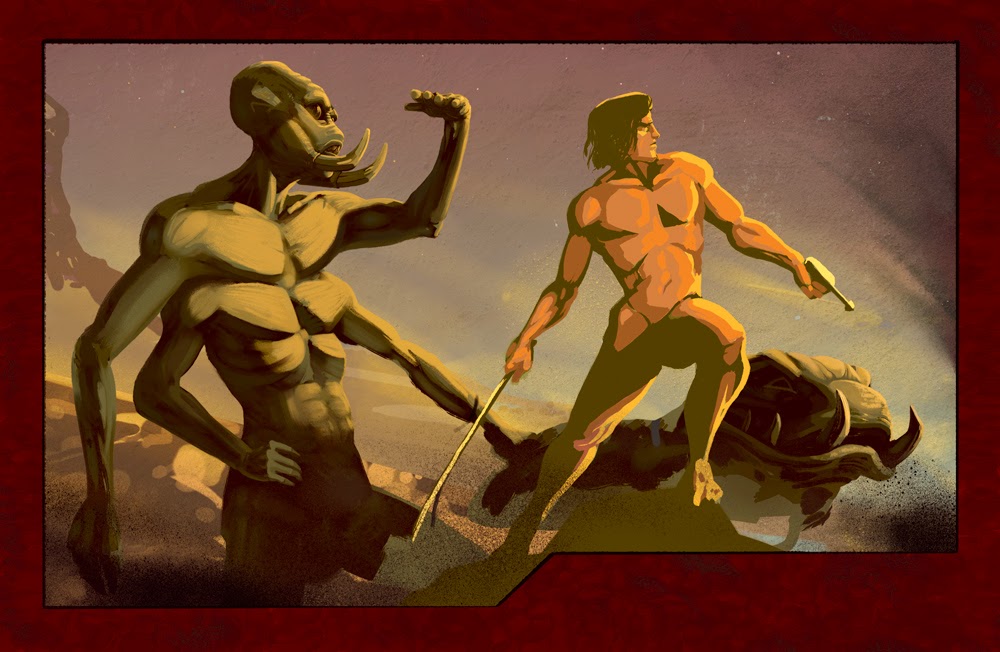 Austin Wizard World was a lot of fun!  To all those who came out and those who helped as volunteers and staffers, thanks very much -- The show was all the better for your being there!  I really hope it works out that we can make it happen next year :D  In the meantime, the next opportunity to catch me at a show will be at Space City Con in Galveston, TX!  Should be good times!
Posted by ArtByBeaver at 9:34 PM No comments:

Sorry it's been awhile since the last update.  I had to put this aside for a bit due to hectic times at work, conventions and other events; a commission (which I'll be able to share soon); and being just plain disillusioned.  I'll show why.. This is how it was looking up til this evening: 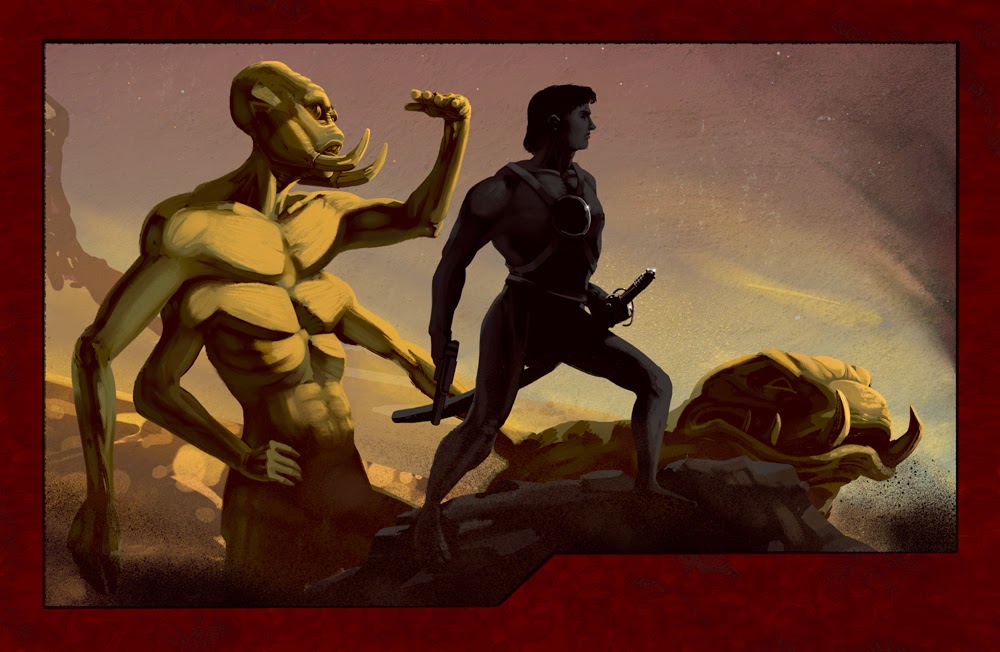 ...And somethin' about it just kept bothering me.  After I ran it by one of my coworkers I realized JC's pose was too passive & static, his sword wasn't helping his silhouette, he was too centered, his anatomy just wasn't going to resolve, and his pose was too similar to the Thark's.  To help illustrate: 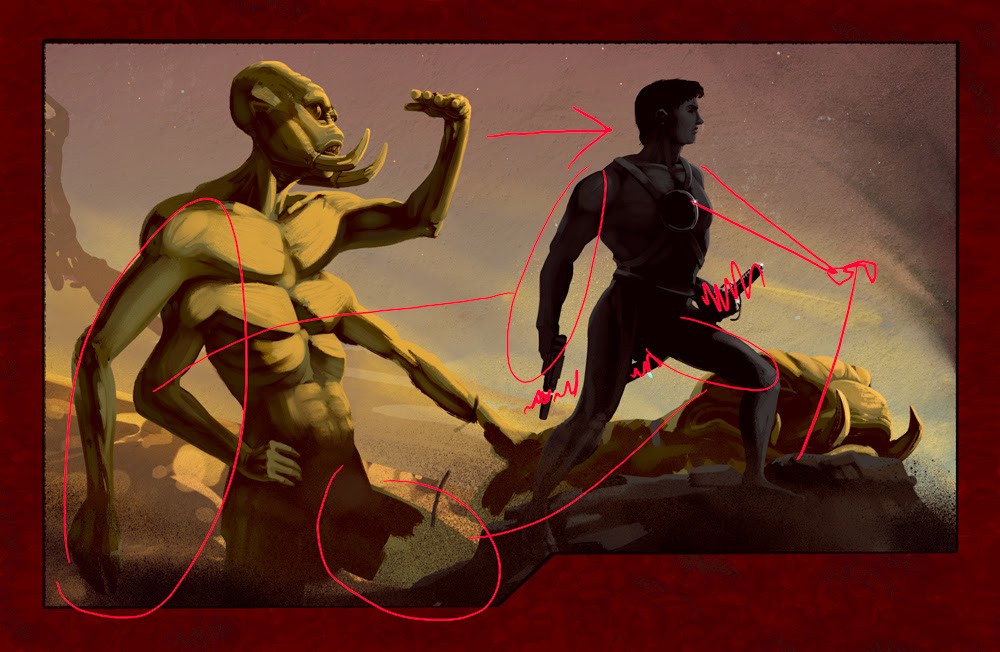 Only one thing to be done for it -- Total teardown!  The original drawing was drawn/painted over with an all-new pose... 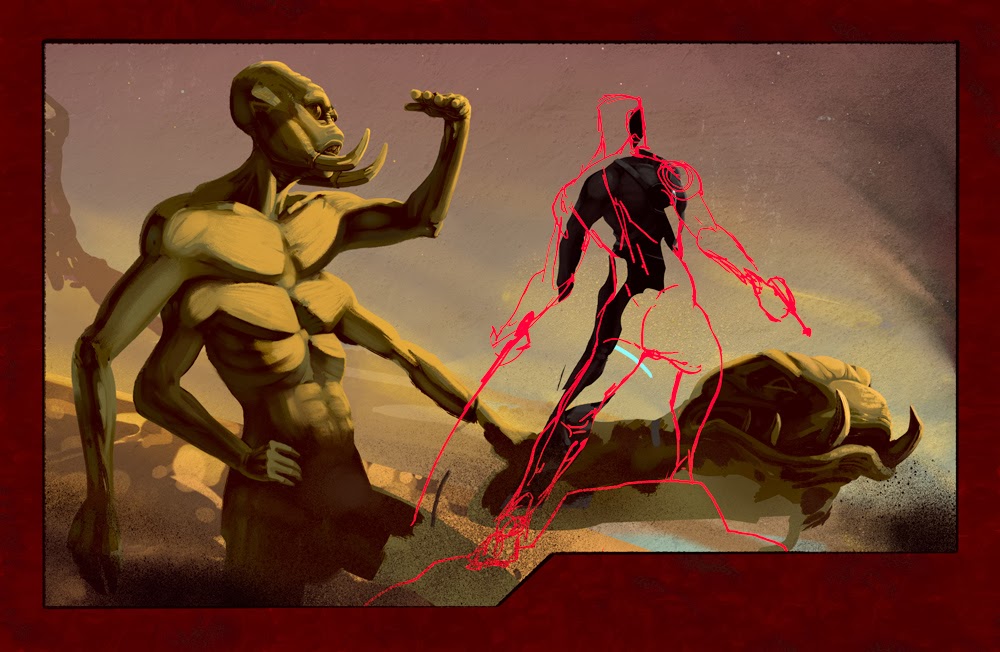 By the time I had to go home I'd found a way to have nearly the same pose, but facing the viewer. 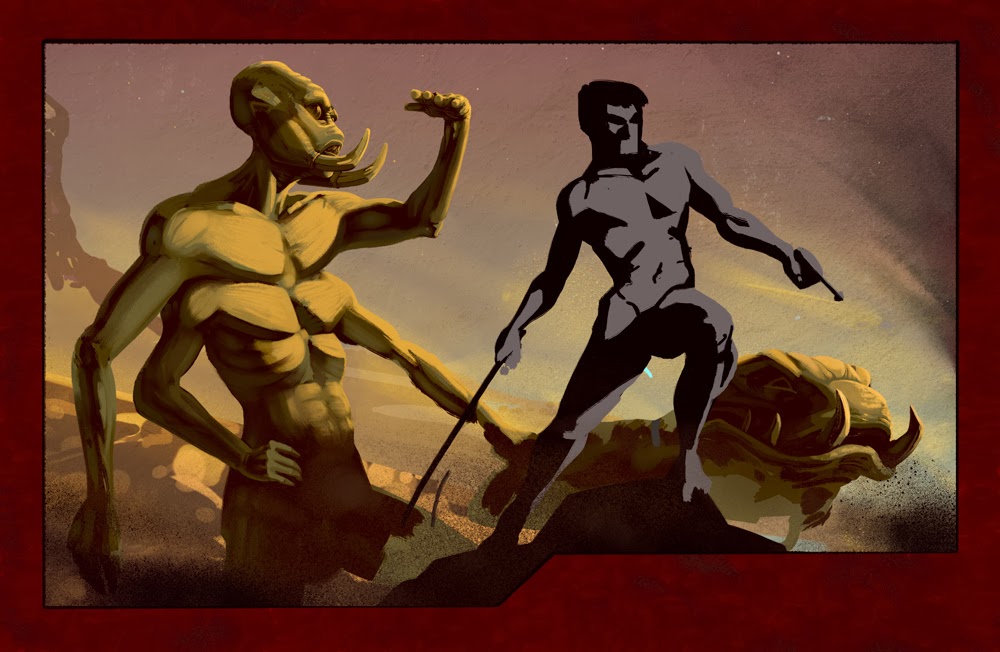 There's still a lot about the pose that I need to resolve before I really get into detail, and of course now I'll need to paint in everything behind him -- But ultimately it should end up as a better starting point than the first.  Sometimes when you've hit a wall, the wisest solution to a problem is to scrap it and start over -- And the next time, addressing the new ideas you've had since.

Now, to put the piece to bed again until after Wizard World :\  Remember -- I'll be drawing there all weekend, whether at the Powerhouse Animation booth or my own or at the Digital Painting instruction-panel on Sunday!  Hope to see you there!
Posted by ArtByBeaver at 10:40 PM No comments:

SPECIAL EVENT!
Sunday, 12:30 – 1:15PM COMICS AND DIGITAL PAINTING WITH CHRIS BEAVERJoin Powerhouse Animation staff-artist Chris Beaver for an introduction on how to create a digital painting in Photoshop. In this session we’ll touch on the tools of the trade, learn valuable Photoshop tips & tricks, discover useful techniques, discuss time-honored painting theories and how to apply them to new media, and watch a piece of artwork unfold from its earliest sketches to its final execution! (MEETING ROOM 12)

Should be fun :D  It'd be a cool show if that alone were what I was up to, but I'll also have a half-table of my own and be helping out at the Powerhouse Animation booth!  Gonna be crazy.  Please, swing by and say hi when you're in Artist's Alley!
Posted by ArtByBeaver at 10:17 PM No comments: